A Portuguese branch of the Anonymous hacking collective says it has shut down around 20 Angolan government websites in retaliation to the jailing of 17 youth activists for plotting a “rebellion”.

The youths, including well-known rapper Luaty Beirão, were sentenced on Monday to between two and eight-and-a-half years, in a ruling that Amnesty International said was “an affront to justice”. 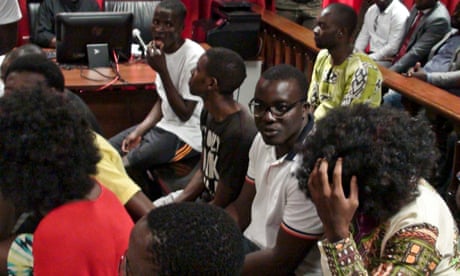 In a statement on its Facebook page the Anonymous Portugal group listed the government websites it said it had attacked. None of the websites were accessible on Wednesday.

“The real criminals are outside, defended by the capitalist system that increasingly spreads in the minds of the weak,” Anonymous said.

There was no immediate comment from the Angolan government on the alleged cyber attack.

Beirão, who holds dual Portuguese and Angolan nationality, has a loyal fan base inPortugal, the colonial ruler of Angola until the country won its independence after a protracted war in 1974.

Amnesty called for the immediate release of the activists, 15 of whom were detained during a weekly book group meeting in the capital Luanda last June.

“The activists have been wrongly convicted in a deeply-politicised trial. They are the victims of a government determined to intimidate anyone who dares to question its repressive policies.”

At the sentencing, about 30 protesters outside the court yelled “free the youths, arrest dictator Jose Eduardo dos Santos”, the president of Angola since 1979.

A man who shouted inside the court that the sentences were a “travesty of justice” was himself sentenced on Tuesday to eight months in jail.

The jailed activists insist they are peaceful campaigners lobbying for Dos Santos, 73, to step down.

This month, he said he would retire in 2018 but the announcement was received with scepticism following two similar pledges in the past. His current mandate ends at the end of next year.