Technocrats at DARPA are creating a new technology that could potentially become the deadliest bioweapon on earth.

The Defense Advanced Research Projects Agency is an agency of the Department of Defense and develops technology for the military.

A team of scientist sounds the alarm in a new Science Policy Forum report (Agricultural Research, or a New Bioweapon System?) about a mysterious U.S. government program that is developing genetically modified viruses that would be dispersed into the environment using insects.

The virus-infected or ‘Frankenstein’ insects are being developed as countermeasures against potential natural and engineered threats to the U.S. food supply.

The program is operated by the Pentagon’s Defense Advanced Research Project Agency (DARPA) could be viewed as an attempt to develop an entirely new class of bioweapons that would prompt other nations to seek similar weapons, they cautioned.

The researchers from the Max Planck Institute for Evolutionary Biology and the University of Freiburg both in Germany, and the University of Montpellier in France suggest DARPA’s program could likely breach the Biological Weapons Convention, the first multilateral disarmament treaty banning the development, production, and stockpiling of biological and toxin weapons.

The technology at the center of the program is an entirely new method of genetically modifying crops.

Instead of modifying seeds in a lab, farmers would send swarms of insects into their crops, where the genetically modified bugs would infect plants with a virus that passes along the new resilience genes, a process known as horizontal genetic alteration.

For HEGAA to work, Gizmodo explains that DARPA labs develop a virus that is inserted into the chromosome of a target organism. Scientists would use leafhoppers, whiteflies, and aphids genetically altered in the lab using CRISPR, or a variant of a gene-editing system, to carry the virus into crops. 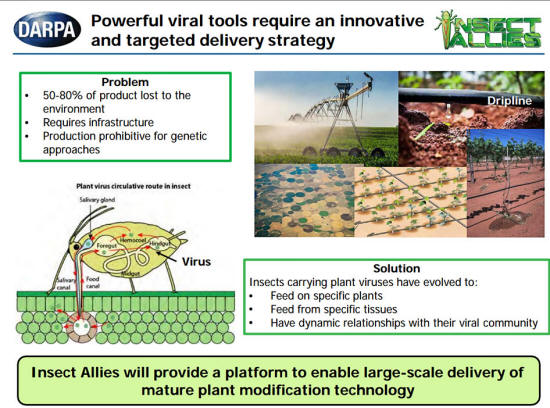 Each plant would then be infected by the insect, triggering the intended effects of protecting crops from natural and or human-made threats.

However, the lead author of the report, Richard Guy Reeves from the Department of Evolutionary Genetics at the Max Planck Institute for Evolutionary Biology, says DARPA’s Insect Allies program is disturbing and an example of dual-use research in which the U.S. government, in addition to aiding farmers’ crops, is also developing a biological weapon.

Insect Allies is reportedly backed by $27 million of funding.

According to Gizmodo, there are four academic research teams currently working on the project, including researchers at the,

“all work is conducted inside closed laboratories, greenhouses, or other secured facilities,” and that the insects have built-in lifespans to limit their spread.

By 2020 or 2021, DARPA is planning on testing the virus-infected insects on crops inside greenhouses at undisclosed locations.

Reeves said the use of insects as a vehicle for genetic modification is a horrible idea because they cannot be controlled and indicates that traditional overhead sprays to deliver HEGAAs is the safest bet.

DARPA says insects are the only practical solution, as overhead spraying of HEGAAs would require increased farming infrastructure – something that is not available to all farmers. 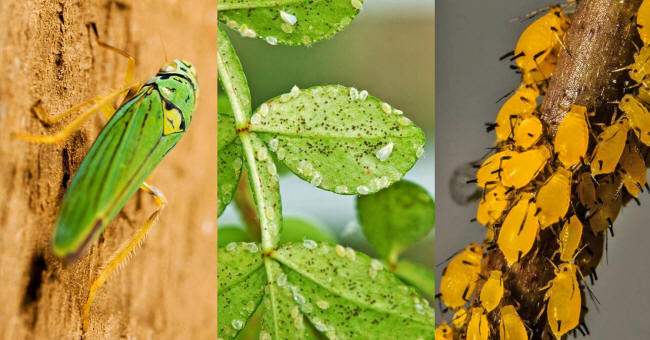 Scientists are critical of a DARPA program

that they say could turn three types of insects:

into a biological army.

The report specifies how there is currently no global regulatory framework to support this new way of transporting HEGAAs to crops, which if not supervised correctly, could lead to potential mishaps.

The scientists of the report interpret DARPA’s insect program as,

“an intention to develop a means of delivery of HEGAAs for offensive purposes,” such as conducting biological warfare.

These genetically modified bugs could be implanted with a dangerous plant-killing disease that the Trump administration could unleash over farmland in Venezuela, Syria, Iran, North Korea, Russia, and or even China, that would decimate the countries’ food supply.

The introduction of this potentially dangerous technology, the scientists argue, would usher in an entirely new class of biological, insect-dispatched weapons that could be considered weapons of mass destruction. Scientists warn that this technology would spur rival nations to develop similar insect programs.

In response to a Gizmodo question, a spokesperson for DARPA said it welcomes academic dialogue about the Insect Allies program, but criticizes the conclusion of the report, saying it is,

“misleading and peppered with inaccuracies.”

Blake Bextine, DARPA Program Manager for Insect Allies, rejects many of the claims made by Reeves.

“DARPA is not producing biological weapons, and we reject the hypothetical scenario,” Bextine told Gizmodo.

“We accept and agree with concerns about potential dual use of technology, an issue that comes up with virtually every new powerful technology.

Those concerns are precisely why we structured the Insect Allies program the way we did, as a transparent, university-led, fundamental research effort that benefits from the active participation of regulators and ethicists and proactive communication to policymakers,” said Bextine.

The purpose of Insect Allies program, he states, is to prepare for a new era of emerging threats to U.S. agriculture.

Brextine added that DARPA is evaluating the potential environmental impacts of HEGAAs.

“DARPA is extraordinarily sensitive to environmental risks and off-target effects, and has structured the Insect Allies program to identify and mitigate them,” he said.

“DARPA has mandated multiple levels of biosafety and biosecurity at each stage of the program.”

If DARPA’s program succeeds, they will have developed gain-of-function treatments that can be delivered to the,

“right plants” and the “right tissue,” he said.

“The social, ethical, political, and ecological implications of producing HEGAAs are significant and worthy of the same level of attention as exploring the science underpinning the potential technology,” Delborne told Gizmodo.

“The authors argue persuasively that specifying insects as the preferred delivery mechanism for HEGAAs is poorly justified by visions of agricultural applications.

The infrastructure and expertise required for spraying agricultural fields – at least in the U.S. context – is well established, and this delivery mechanism would offer greater control over the potential spread of a HEGAA.”

DARPA could be on the cusp of obtaining a new biological weapon that would most certainly be used against,

…to cripple the countries’ food supply and lead to a regime change without firing a signal shot… this the future of warfare.