Syria has been at the center of a decades-long plot by the United States to depone the sovereign government and install one supportive of its business goals in the Middle East.

President Donald Trump has repeatedly castigated President Bashar al-Assad for ordering a gruesome mass killing of civilians with chemical weapons in Khan Sheikhoun. Due to insufficient investigation, this accusation, unsubstantiated, sparked overwhelming support for the Syrian regime from both Moscow and Tehran.

Could Trump have earned a congressional green light and perhaps approval from NATO to obliterate Syrian Arab Army forces responsible if the account of an ordered chemical weapons attack proved immutably true? Potentially.

Fifty-nine $1.87 million Tomahawk missiles raining down on a Syrian air base not long after the toxic gassing proves Trump to “stay in line” with a succession of pompously militant and combative presidents. It shows he is stands alongside the neocon political establishment’s longstanding mission to forcibly bend Syria to its own will.

“Syria at present has a hammerlock on US interests both in Lebanon and in the Gulf — through closure of Iraq’s pipeline thereby threatening Iraqi internationalization of the war. The US should consider sharply escalating the pressures against Assad through covertly orchestrating simultaneous military threats against Syria from three border states hostile to Syria: Iraq, Israel and Turkey.” 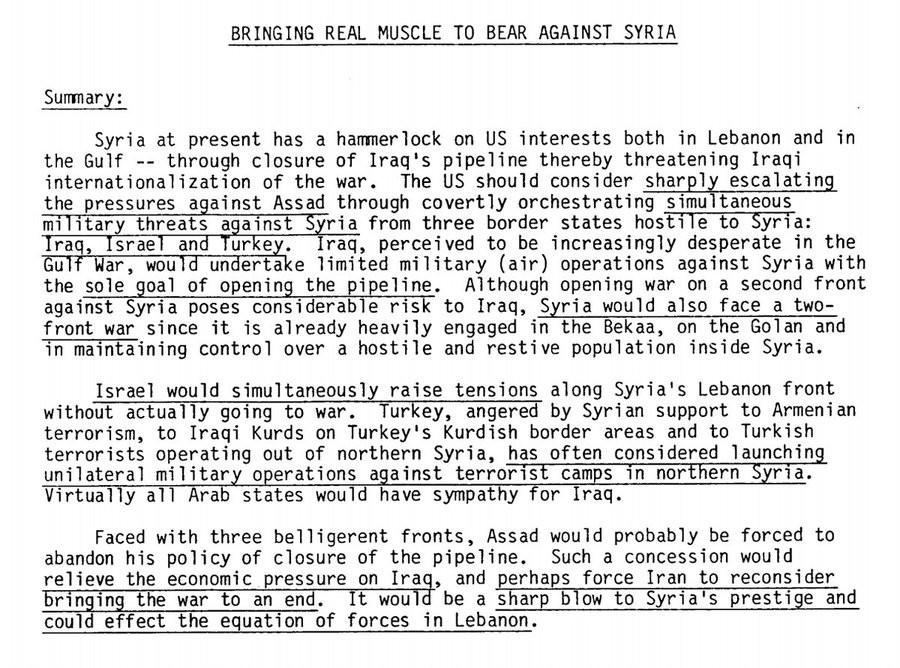 Destabilization of Iraq and Iran is also featured in the intricate U.S. plan to deal with the irritant, elder Assad, who recognized Western ulterior motives.

“Syria continues to maintain a hammerlock on two key U.S. interests in the Middle East.

Diplomatic initiatives to date have had little effect on Assad who has so far correctly calculated the play of forces in the area and concluded they are only weakly arrayed against him. If the U.S. is to rein in Syria’s spoiling role, it can only do so through the exertion of real muscle which will pose a vital threat to Assad’s position and power.”

With Iraq seeking to obtain support internationally in the war, the U.S. had to scramble to prevent the shutdown of a pipeline.  This is a dilemma Fuller suggests could be alleviated through a “change in narrative to present Syria as a more deviant enemy than even Iran.” That, alone, could have changed the face of the war bearing the names of the two principal adversaries, Sunni majority, Iraq, and Syria-allied, Shi’a, Iran.

“The US should consider urging Iraq to take the war to the other key source of its predicament: Syria.” 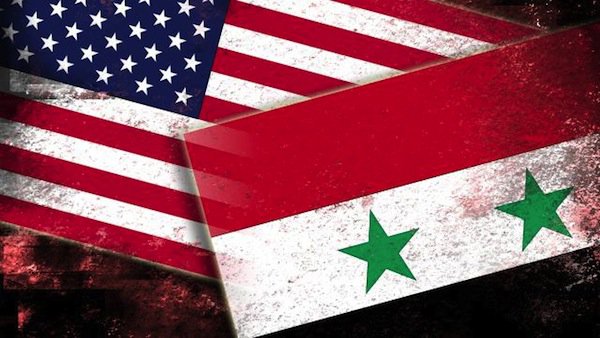 “The US should consider sharply escalating the pressures against Assad [Sr.] through covertly orchestrating simultaneous military threats against Syria from three border states hostile to Syria: Iraq, Israel and Turkey. Iraq, perceived to be increasingly desperate in the Gulf war, would undertake limited military (air) operations against Syria with the sole goal of opening the pipeline. Although opening war on a second front against Syria poses considerable risk to Iraq, Syria would also face a two-front war since it’s already heavily engaged in the Bekaa, on the Golan and in maintaining control over a hostile and restive population inside Syria. Israel would simultaneously raise tensions along Syria’s Lebanon front without actually going to war. Turkey, angered by Syrian support to Armenian terrorism, to Iraqi Kurds on Turkey’s Kurdish border areas and to Turkish terrorists operating out of northern Syria, has often considered launching unilateral military operations against terrorist camps in northern Syria. Virtually all Arab states would have sympathy for Iraq. Faced with three belligerent fronts, Assad would probably be forced to abandon his policy of closure of the pipeline. Such a concession would relieve the economic pressure on Iraq, and perhaps force Iran to reconsider bringing the war to an end. It would be a sharpening blow to Syria’s prestige and could affect the equation of forces in Lebanon.”

In context, then-President Ronald Reagan faced pressure both to insert military power in neutral Lebanon,  and to prohibit military assistance in the troubled regional entanglement. Until a suicide bomber decimated a U.S. Marines barracks encamped at an airport in Beirut, killing hundreds, just one month after the date on Fuller’s Syria action plan.

In “When America Attacked Syria”,  Micah Zenko, Senior Fellow at the Council on Foreign Relations (a Deep State establishment think tank)  wrote in 2012:

“The October 23, 1983, suicide truck bombing of the Marine barracks at the Beirut International Airport would kill 241 U.S. military personnel; simultaneously, another suicide bomber killed fifty-eight French servicemen of the MNF several kilometers away. (Two weeks later, yet another truck bomb exploded in the Israeli military headquarters in Tyre, killing sixty.) An FBI forensics assessment called the Marine barracks bombing the ‘ the biggest non-nuclear explosion since World War II.’ According to a Pentagon commission formed to investigate the attack, it was ‘tantamount to an act of war using the medium of terrorism.’ Within weeks, the CIA determined ‘the bombings…of the United States and French MNF headquarters were carried out by Shia radicals, armed, trained, and directed by Syria and Iran.’”

The fact the CIA determined fault for the bombings rested with Syria and Iran left both plausibly responsible, with public perception largely following suit.

A situation eerily similar is playing out nearly three-and-a-half decades later. Behind-the-scenes string-pulling and long-term U.S. commitment to deposing an Assad from rule in Syria bellows resoundingly on failures of interventionist foreign policy. Or, potentially, success.

“Such a threat must be primarily military in nature. At present there are three relatively hostile elements around Syria’s borders: Israel, Iraq and Turkey. Consideration must be given to orchestrating a credible military threat against Syria to induce at least some moderate change in its policies,” Fuller explained in the document.  This paper proposes serious examination of all three states, acting independently, to exert the necessary threat. Use of any one state in isolation cannot create such a credible threat.”

Syria is now a landmine for the Trump administration as it’s been in for a lengthy succession of presidents before.

To comply with the neocon agenda by raining missiles upon Assad’s forces would rightly emblazon the already blood-stained U.S. government as chief aggressors in a conflict nearing resolution, if not become the catalyst for a third world war.

To see the document, check out the video below:

Find out more or adjust your settings.