The ‘official’ record was 56.7C on 10 July 1913 at Furnace Creek Ranch in Death Valley, California, but many doubt that reading was accurate

A weather station in Mitribah, a remote featureless area of north-west Kuwait, took the temperature last week during an intense heatwave that continues in parts of the Middle East. The mercury in neighbouring Iraq on the same day soared to 53.9C (129F) in the ancient city of Basra.

If verified by the World Meteorological Organisation, they will almost certainly be the two highest temperatures ever recorded on the planet.

Until now the official record for the highest temperature was 56.7C (134.1F) on 10 July 1913 at Furnace Creek Ranch in Death Valley, California. But many modern meteorologists are sceptical of the record, arguing that the equipment used at the time was prone to error and not as reliable as modern recording methods. 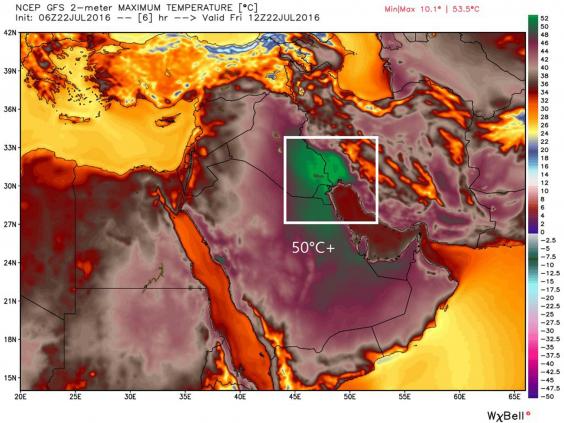 Records show nearby places were nowhere near as hot and the wind conditions not favourable for such high temperatures, they argue.

According to Weather Underground meteorologist Christopher Burt: “That record has been scrutinized perhaps more than any other in the United States. I don’t have much more to add to the debate aside from my belief it is most likely not a valid reading when one looks at all the evidence.”

Dr Jeff Masters, also of Weather Underground, noticed the record-breaking quality potential in Kuwait, describing it as “a historic day”.

Love is the answer