THE WOMEN WERE slapped and shoved down a dusty road. They were blindfolded and forced to the ground. Then they, and two young children, were gunned down — 22 shots from assault rifles fired at close range — by men in military uniforms.

In July, The Intercept was the first media outlet to publish the complete, unedited footage of this murder of four civilians by members of the Cameroonian armed forces — a key U.S. military ally in the region — drawing on extensive investigative work by experts at Amnesty International. The government of Cameroon quickly dismissed reports that its soldiers were involved in the atrocity, calling it “fake news.”

A newly released digital forensic investigation by Amnesty and the BBC offers overwhelming evidence that pinpoints the location of the killings, the make and model of one of the weapons used, and even the identity of the perpetrators, not only demonstrating that they are members of the Cameroonian military, but even providing names of some of the alleged killers. The massacre took place between March 20 and April 5, 2015, not far from the town of Zelevet, in the Far North region of Cameroon, according to the findings.

THREAD In July 2018, a horrifying video began to circulate on social media. 2 women & 2 young children are led away by a group of soldiers. They are blindfolded, forced to the ground, and shot 22 times. #BBCAfricaEye investigated this atrocity. This is what we found… 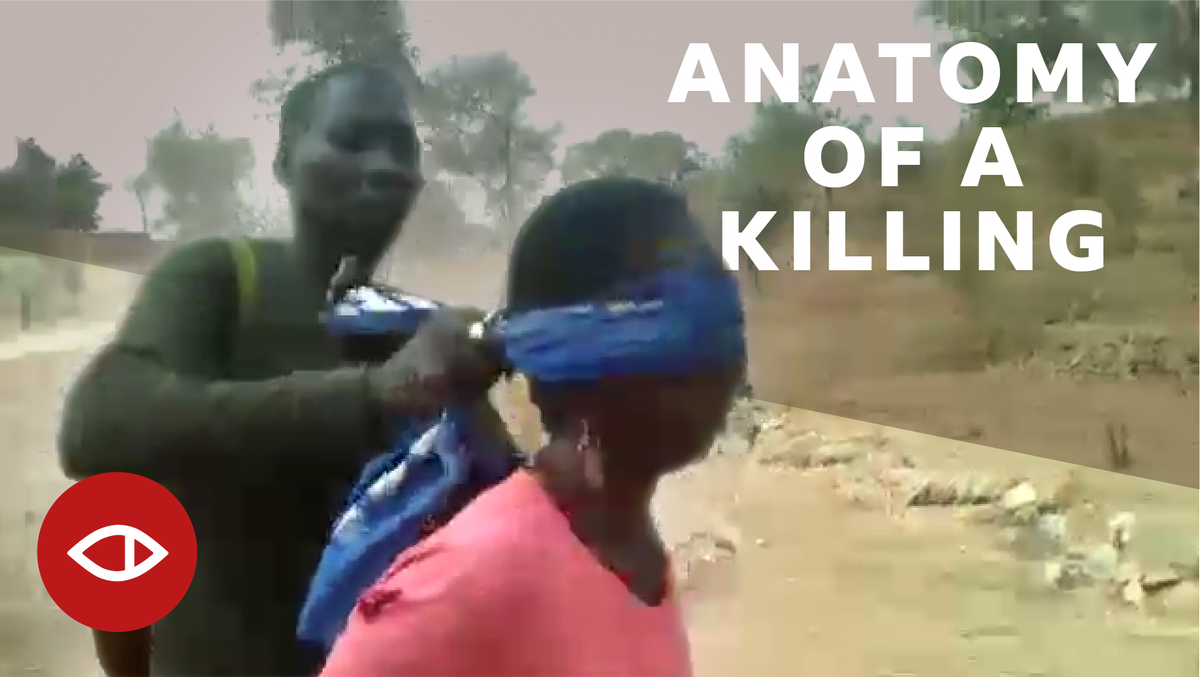 A “vital” U.S. counterterrorism partner in the Lake Chad Basin, according to the Pentagon, Cameroon has been authorized to receive roughly $200 million in American security aid since 2015. For years, the United States has also provided intelligence and training in counterterrorism skills, such as urban assault operations, to Cameroon’s armed forces. The U.S. military utilizes an outpost in the north of the country, known as Contingency Location Garoua, to fly drone missions. Members of the Army’s Task Force Darby, a military unit that includes soldiers and airmen, also serve at the base to support Cameroonian forces fighting the terrorist group Boko Haram.

“We are aware of the video. At this time, we cannot confirm the authenticity of the video, nor can we confirm any possible military affiliation of those shown in this troubling video,” Maj. Sheryll Klinkel, a Pentagon spokesperson, told The Intercept after the massacre footage surfaced online in July.

The Pentagon appeared to be unswayed by the new BBC/Amnesty investigation. “I don’t have much more to provide you beyond what I have previously, nothing has changed recently,” Klinkel told The Intercept when asked about the new analysis.

“This is not an isolated incident,” Ilaria Allegrozzi, Amnesty International’s Lake Chad researcher, said of the atrocity footage. “This is part of an inherently abusive system put in place by the Cameroonian security forces to address security threats. Cameroonian security forces have a long track record of abusive conduct both in the Far North region, where they fight Boko Haram, and in the Anglophone regions, where they are deployed to confront the armed separatists.”

Last month, The Intercept published another video showing the massacre of civilians by Cameroonian soldiers. That mass killing likely took place in the village of Achigachiya, also in the Far North region, in January 2015.

In 2017, Amnesty, the London-based research firm Forensic Architecture, and The Intercept exposed illegal imprisonment, torture, and killings by Cameroonian troops at a remote military base known as Salak, which is also used by U.S. personnel and private contractors for training missions and drone surveillance. U.S. Africa Command launched an investigation, but never publicly announced details about its aims and has not released the results. AFRICOM has not responded to repeated requests from The Intercept seeking comment about the parameters, scope, and findings of its probe, which was headed by Brig. Gen. Timothy McAteer and concluded in November 2017.

“We urge the U.S. to make the findings of the AFRICOM investigation public to ascertain whether there was any knowledge of incommunicado detention, torture, and death in custody at the military outpost where U.S. military personnel were based — Salak — and to show that they take human rights issues seriously when it comes to their military cooperation,” Amnesty’s Allegrozzi told The Intercept.

The BBC identified the three men shown shooting women and children in the spring 2015 video as Cyriaque Bityala, Barnabas Donossou, and Lance Corporal Tsanga. All three appear on a list of troops arrested by the Cameroonian government in connection with the massacre. “Seven soldiers were arrested,” Issa Tchiroma Bakary, a Cameroonian government spokesperson, told the BBC. “They are under investigation right now.”

“The Cameroonian government is taking some steps to address allegations of human rights abuses. This includes the arrest of seven individuals linked to the first video, and President [Paul] Biya ordering official investigations into all videos purportedly depicting Cameroonian security forces engaging in extrajudicial killings,” Nick Sadoski, deputy spokesperson of the State Department’s Africa Bureau, told The Intercept. “The Cameroonian government has made some efforts toward transparency and reached out to the international community for assistance. This includes the Ministry of Defense undertaking a U.S. government-funded program to train and establish 40 military legal advisers to advance human rights principles and promote security force accountability in the field commands around Cameroon.”

Cameroon’s embassy in Washington, D.C. did not respond to repeated requests for an interview. Nor has Cameroon’s government released any further information in regard to its investigation of the massacre of the women and children, according to the U.S. State Department.

“The next step is for the Cameroonian government to reveal more information about those arrested, where they are being held, whether they have a lawyer, the charges against them, and when or if a trial will start,” said Amnesty’s Allegrozzi. “They also need to provide information on who was in command of those soldiers. We are calling for an independent and impartial investigation into these heinous crimes.”

Videos of executions have become commonplace in our news culture, with the Islamic State, Al Qaeda, and other terror groups filming atrocities and sharing them on social media. But this video from Cameroon is particularly cold-blooded. The soldiers make the women kneel on the ground. One of the soldiers gestures to the young girl and says, “Yes. Little girl, come here,” directing her to stand next to her mother. He then pulls the girl’s shirt over her head, blindfolding her.

Top photo: A screenshot from the video in Cameroon.