Are your Facebook posts being shown to your friends and followers — or have you been “shadowbanned” by Snopes for sharing conservative content on the social media platform?

Shadowbanning is a new concept in social media and involves banning a user from a platform in such a way that the banned user is unaware of the ban. A shadowbanned user will be able to see their own posts, but other users, including friends and followers, do not get to see them in their newsfeed.

Thanks to new Facebook rules, conservatives who share news articles that Snopes decide to suppress, or opinion pieces that CEO David Mikkelson considers deplorable, are having their Facebook posts hidden from their friends, family and followers.

Snopes was tapped by Facebook as one of its approved fact-checking groups and given the ability to mark stories on the site as “true” or “false”. While this idea sounds fine in theory, in practice it has had a chilling effect on free speech, while limiting the free expression of conservatives on the internet.

Let’s look at a recent case in point. This past week many conservatives shared a news article written by this author about a double murder in Huntsville, Alabama. Two men were arrested and charged, including a Mexican Sinaloa cartel employee who was later detained by U.S. Immigration and Customs Enforcement (ICE).

Why is @Snopes allowed to arbitrarily ‘fact-check’ a completely legitimate article, giving it a ‘mixture’ rating, and thus dramatically halting its spread on @Facebook. Isn’t this a gross misuse of the fact-checking feature? cc: @RepGoodlatte @TGowdySC pic.twitter.com/RrbVhg9mWs 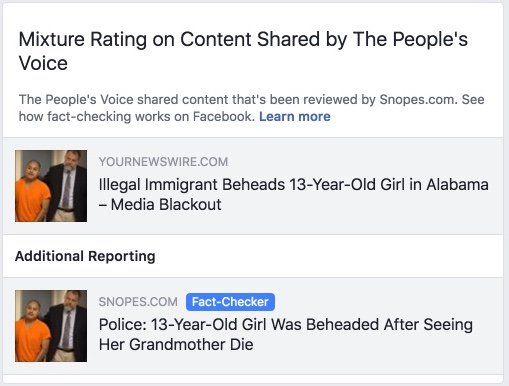 This was the original article @snopes founder @davidpmikkelson decided to ‘fact-check’ – automatically causing @facebook‘s algorithm to stop people from seeing it: https://yournewswire.com/illegal-immigrant-ice-beheading/ …

An illegal immigrant forced a 13-year-old Alabama girl to watch the murder of her grandmother before beheading her with a knife.

Snopes reviewed the article and gave it a “Mixture” rating, presumably meaning they believe some information contained in the article is false.

According to the Snopes “debunk”, there are two reasons they deem the news article about a barbaric crime worthy of suppression on social media:

Why is @Snopes allowed to arbitrarily ‘fact-check’ a completely legitimate article, giving it a ‘mixture’ rating, and thus dramatically halting its spread on @Facebook. Isn’t this a gross misuse of the fact-checking feature? cc: @RepGoodlatte @TGowdySC pic.twitter.com/RrbVhg9mWs

There was no MSM coverage but local news. No CNN, NBC,ABC, CBS or FOX. I live just across the state line from Huntsville, Al

Are these the real reasons Snopes chose to suppress the real, verified crime story on Facebook? Or is it because the story does not fit the liberal agenda pushed by the Democratic Party and mainstream news outlets?

Whereas an alternative media outlet publishing news of interest to conservatives will be suppressed by Snopes for the thought crime of identifying an ICE detainee as an illegal alien.

This absurd “ruling” by the Snopes’ CEO means conservatives who are concerned about a barbaric crime that was committed by an illegal alien will not be allowed to share the content with their friends and followers. The real, verified information contained in the article has been stopped from reaching the public by Snopes.

Information deemed important enough to be shared by American citizens will now be hidden from their friends, family and followers on Facebook — effectively shadowbanning these users — because David Mikkelson thinks a Mexican Sinaloa cartel employee — who has been detained by ICE — is not necessarily an illegal alien.

It is worth remembering at this point that Snopes are a team of unqualified amateurs who do not hold qualifications as journalists or investigators. CEO David Mikkelson employed his new wife, an L.A. based high class escort, to work for the fact checking site. The rest of the contributors are bloggers with liberal activist backgrounds.

Lead fact checker Kim LaCapria even admits she regularly “fact checks” while stoned. It’s California, it’s legal. That’s not the problem. The problem is that fact checking political news is a serious business, and it should be taken seriously by Snopes – especially now that Facebook have anointed them watchdogs of all of our news feeds with the power to shadowban users.

Facebook should draw the line at using the services of a fact checking company whose senior staff admit they work while stoned. There is too much at stake.