These bursts are considered one of the most mysterious things in space. And they just became even more of a mystery

The messages were picked up by Breakthrough Listen, a major project launched by Stephen Hawking and Internet investor Yuri Milner in 2015, as part of their programme to find signs of intelligent life in the universe.

Using the Green Bank Telescope in West Virginia, Dr Vishal Gajjar and the Listen science team detected the bursts in the early hours of Saturday 26 August.

Fast radio bursts, or FRBs, are perhaps the most mysterious thing in the known universe: strange, brief emissions that come from distant but unknown sources, which have been seen by several telescopes around the world.

The bursts appear to line up in a strange alignment, and often come from the same part of space, leading some to suggest that they could be intentional rather than the result of physical events.

This time, scientists have received 15 powerful signals coming from one location, known as FRB 121102. These are also the highest frequency bursts ever detected from FRB 121102, with the brightest emission occurring at around 7 GHz. 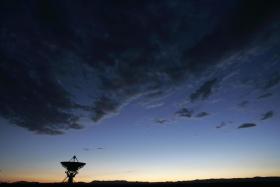 Scientists find source of the most mysterious message in the universe

In 2016, scientists identified the location of the repeating burst as a dwarf galaxy, around three billion light years away.

That means that those pulses left their galaxy when our entire Solar System was just two billion years’ old – long before multi-celled organisms appeared on Earth.

Since then, astronomers have been pointing telescopes at the same galaxy in an attempt to see more of the bursts, and understand them.

Little is known about FRBs, including how exactly the bursts are being sent to Earth. It’s difficult to know when or where they will occur, so the repeating galaxy has become an important and reliable way of spotting them.

The newly discovered bursts will also allow scientists to see more of what is actually happening than ever before, according to the scientists who detected them.

“As well as confirming that the source is in a newly active state, the high resolution of the data obtained by the Listen instrument will allow measurement of the properties of these mysterious bursts at a higher precision than ever possible before,” said Breakthrough Listen postdoctoral researcher Vishal Gajjar, who discovered the increased activity.

Scientists had initially been worried that the bursts might not be coming from space, and were actually a misunderstood signal from Earth – like when astronomers found that they had accidentally detected their own microwav